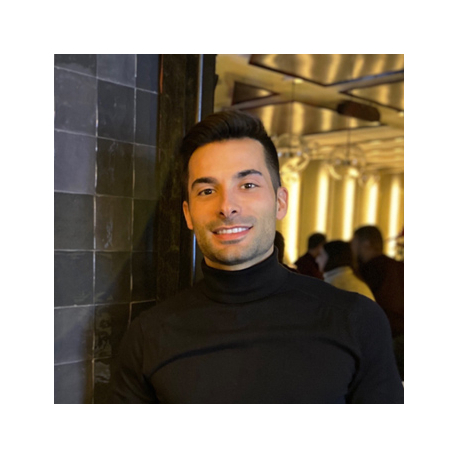 "When I begin my work, I never truly know what the final result is going to be. The initial idea oftentimes has nothing to do with the end result. The colors and forms tend to appear before me, so I just simply lend them my artistic hand to help them define themselves. As these aspects are defined, colors emerge, and finally, one continuous line unites all these parts, serving as the final signature that defines the work. My work is a fusion of elements, composed of many different layers of colors, contours and lines." / Christo Hill

Christo Hill hails from the west of Spain, from a small town nestled right on the border with Portugal. He was raised between two countries and while some people may have seen the border as a divide, Christo came to the realization that these so-called borders were simply a figment of the imagination more than anything else. This contrast in cultures is what awakened the artist's unique sense of artistic beauty. Christo is fascinated by art that is both unconventional and does not adhere to strict rules. The fusion of these two cultures can be seen from the bluish hues reminiscent of Portuguese tilework that unite themselves with the brilliant array of colors that are ever-present in the south of Spain.

"Living on the border between two countries has taught me that lines don ́t always separate, that at times they can be united and used to create something new." / Christo Hill

Christo studied Fine Arts at the University of Sevilla. During this time he also worked with esteemed designers Victorio & Lucchino, renowned for their high-end flamenco inspired fashion. His time here was the most decisive and influential in the development of his unique sense of color which is clearly seen in his works.

Wanting to dive deeper into the world of art he later specialized in the Psychology of Artistic Creation. It was when he began to ask himself how his work could be defined. So the question he constantly asks himself is whether an image is defined by the shape, the color, or the line?

Christo has held exhibitions of his artwork all throughout the Iberian Peninsula. Most recently he was chosen to be part of the permanent collection at Galería Antares, one of the most prestigious of Seville.