"Authenticity is the most courageous of all liberties."

Emmanuel Oger is a self-taught visionary, driven by his humanist convictions and his search for meaning. Oger got his start as an entrepreneur who held himself to the highest standards in the fields of event management and communications. When he began to crave more freedom of expression, Oger reached a turning point in this life where he took a step forward letting his creative mind freely express what he felt in his heart. Considering authenticity and originality, dedication to his art became his true passion—what he considered the most courageous and noble of liberties.

His journey of discovery and enlightenment was triggered by a documentary called "French Bashing" (2014), that focused on unfair clichés and common misrepresentation and resentment towards French people and their culture. Oger was deeply moved by this unjust portrayal and set out on a personal mission to use his art to properly celebrate French culture. Using his artist's soul and entrepreneurial mind, Oger created a way to highlight France and its beautiful history and essence through his art. He believes that the resilience of France and its unique artistic heritage is absolutely imperative and must be allowed to truly shine. Through this personal and cultural journey, the ‘Gallus’ project was born.

"Let us recapture our glories of old, regain our impertinence, re-live our passions, our French audacity, and our sense of creativity."

Motivated by his deep-rooted desire and determination to make a mark on 21st century France, Emmanuel Oger created Gallus. Through a long journey of artistic exploration, Oger found inspiration for his collection in the Rooster, a highly symbolic figure that transcends cultures and time. Through the creation of these pieces Emmanuel Oger has successfully recreated the idea of the symbolic rooster as an object of desire, beauty, and excellence.

Satisfy your fiery side with a bold red that connects dynamism with a passion to symbolize a bold character always turned towards pleasure. Capture and harness the seductive and sensual vibe of this ravishing red that gives rose gardens and red lips a run for their money. 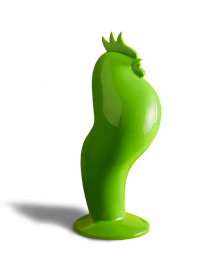 Green is symbolic of nature and all things grounded and organic. This reassuring hue combines nature and modernity bringing the beauty of green rolling hills, tall statuesque pine trees, or even a shiny green apple right into your home. Pure and elegant, this shade brings a refined feel to any style of interior design. 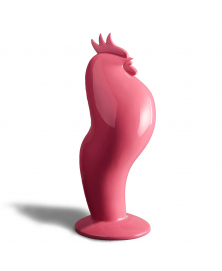 A pink sculpture in your home lets everyone know you’re not afraid to take style risks. With this color, the artist refers to sour candy alluding to the feeling of light amusement that’s both playful and poetically dreamy. So pucker up with a shade that embodies the art of being unique and not afraid to show it off. Orange - a color that evokes the ravishing feelings one only gets from the blissful setting of a sunrise or sunset. With a nod to the stimulating zest of citrus fruits, this shade of orange symbolizes enduring vitality and its energy radiates far and wide to bring new light to everyday life. 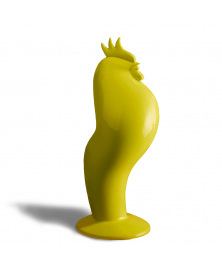 Yellow - an obvious symbol used to highlight the optimism and reassurance of the sun. Bring positivity into your home that’s as comforting as the anticipation of the sun rising each morning. This yellow lights creativity with zealous energy and provides key essentials for tangy well-being. Blue - a perfect blend of bright and vibrant with soft and free brings a sober and dignified lightness, translating an almost juvenile representation of the world around us. Feel the pure coveted joy life has to offer with a color reminiscent of the sky on an ideal summer day.